A documentary on a little known Polish man who helped to provide relief in Ireland during the Great Famine will be shown at Clare Museum during the PolskaEire Festival in Ennis.

Pawel Edmund Strzelecki, a geologist who became a British subject in 1845, arrived in Ireland the following year and became involved with the British Relief Association which was attempting to provide assistance to famine victims.

The documentary will be shown on a loop at Clare Museum for the week of the PolskaEire Festival. 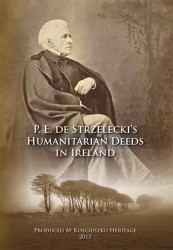